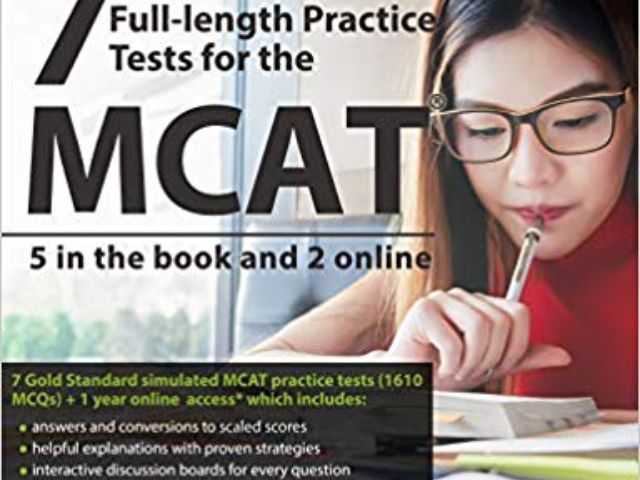 This post promises to guide you on how to review MCAT practice tests effectively.

If that is what you want to learn right now, then stay tuned as I walk you through the steps to effectively review MCAT practice tests.

I’m writing this because so many users have asked about it.

So if you also sent in your request, not to worry we’re gonna cover how to properly review your MCAT practice tests right here on this page.

This is very important because the AAMC only gives so many official practice tests.

So maximizing what you can squeeze out of each test is really important.

How to review MCAT practice tests

My first tip is:

When reviewing your MCAT practice test is not to just review the questions but to also review the passages.

There’s a lot of good information you can get just from the passages themselves.

So look for things in the passage even if it’s not directly asked in a question.

For example, when reviewing the biology portion of your practice test, you should make sure to go back to the passage and make sure you understand everything about the tables and the graphs that are shown.

Even if it’s not a question directly on that row or column in the table, you should still make an effort to figure out what exactly is going on there because that can possibly help you on the actual test.

Another thing I highly recommend when taking your practice tests is to mark things that you are not sure of.

Like in a table if you don’t understand a row or in a variable passage, there’s a shift where you’re not really understanding how the tone shift or what the author is saying exactly to mark things in the passages themselves.

This will help you when you come back to review your practice test, you’ll be able to directly pinpoint those areas of confusion in the passages themselves even if they are not a question on them.

My second tip is:

For every concept tested on the exam, make sure you verify that you know all the related concepts as well.

So for example, if you whether or not you got a question about a southern blot, right?

You still want to mentally think do I know all the other blots like a Western blot and if you don’t you should really go back to your notes or wherever to make sure you understand everything related to that concept.

Because the AMC has so many practice tests and they’re not going to be able to cover each and every specific question and concept.

But if you do this and you’re able to expand that web of ideas for every concept tested, you’re basically going to know everything materialized when it comes to exam day.

My third recommendation is:

When reviewing your practice tests, do not only review the correct answer and explanation.

Because while it might take some time, it’s really helpful and that’s because it helps you understand the logic of the test maker.

This I think works especially well in the MCAT because it’s such a broad test that tests so many things and that requires you to memorize so many little equations and facts.

And that’s to create a list of concepts, equations, facts, or anything else that either is constantly reappearing on your practice tests or that you constantly keep forgetting.

And that’s because obviously, you’ll have something in a quick reference to save you time down the road.

But also having things written in your own way and seeing that same sheet over and over is going to help you much better solidify that information.

And by putting things that constantly reappear on practice tests on it you’re able to better specify what are the most important things for you to know.

And it’s also something you can reference the day before the test.

This is a quick one and that’s to make sure you review every single question on your practice test.

And I know a lot of people that start this way but then they see how daunting it is and then they just move on to reviewing their incorrect answers.

Make sure you review every single question whether right or wrong.

And there’s a lot of benefits to this:

And that’s for when you’re reviewing your practice test you’re obviously going to be unsure of some questions and you’re gonna be like hmm I still don’t understand this even after reviewing the explanation they gave and thinking about it.

So where do I go from here?

Definitely, you’ll ask your friends or your teachers.

But here is one cool trick that you can do.

Just copy and paste either passages or questions directly into Google and you’ll have tons of people on Reddit or wherever talking about how they were confused about a certain passage or a certain part of a passage or directly addressing something with a question and so you’ll be able to get.

Sometimes it’s a little confusing sometimes people don’t know what they’re talking about but for the most part, it’s a really valuable resource.

Well, I think that wraps up this post thank you for reading.

If you want more MCAT content just let me know maybe I can make a post on cars next.

I know a lot of people are having trouble with that so just let me know and make sure to read my other posts or share this post.

We are glad that you visited our website and want to know more about us. Pushfinder is a blog about general information that will keep you informed. What is it that you are looking for? Here, we have contents from across industries shared by exp...Read more